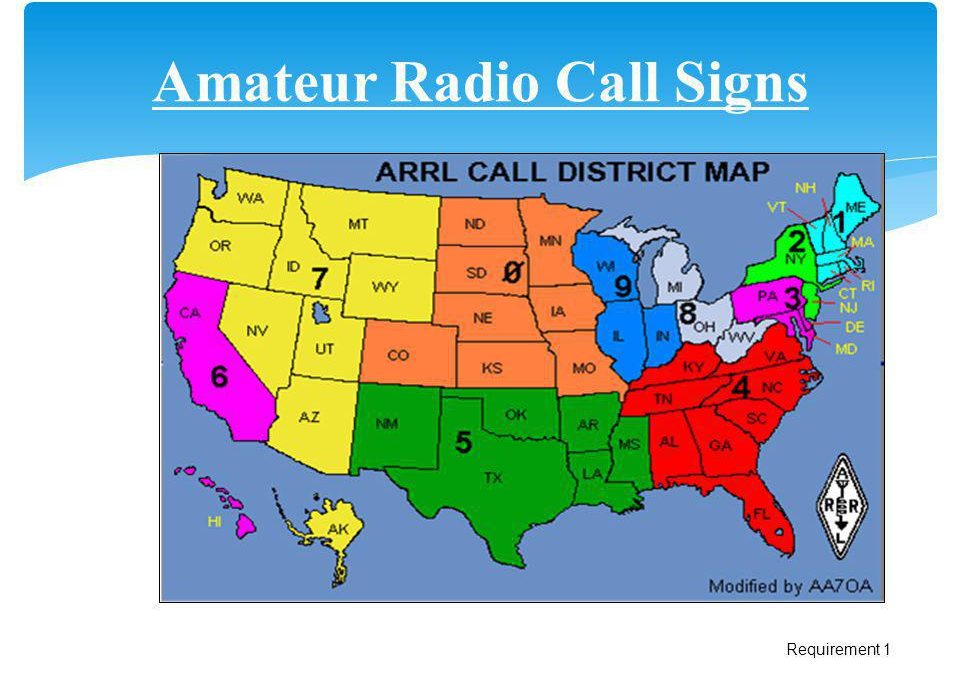 Call signs in the United States used to be very easy for one Ham Operator to tell which area in the US the Ham they were talking to was from! A 6 call was from California or some state near, or a 0 call was New York or a state near New York, they did not even need to look at the call map! Today a Amateur Radio Operator can move from North Carolina where it is a 4 call to Texas where it is a 5 call and keep their 4 call.

Call signs (in the United States) consist of one or two letters, a number, and one to three more letters. The first part of the call sign denoted what country they are from, with the US being A, AA – AK K, KA – KK, KM – KW, KX – KZ, N, NA – NK, NM – NW, NM – NW, NX – NZ, WA – WK, WM – WO, WQ – WW, and WX – WZ.
Also in the US, AA – AK was issued only to Amateur Extras. Each country has been assigned a country designation by a governing body.  This group is made up from representatives from all over the world and is not only concerned with ham communication but all communication. I am not going to get into the designations for the countries. There are several charts available that shows the different designations and the country it relates to. The number in the Call Sign tells what part of the US they reside in.

As was said before, it WAS very easy to tell about the Amateur Operator you are talking to! Now there also is a call sign we call a Vanity Call here is the US.  The FCC (Federal Communications Commission) permit hams to apply for a call that means something to them. If your Dad, Aunt, or someone you knew had a call sign at one time that you wanted, you could request that call sign (for a small fee) as long as no else had that sign. If your name was Joe, you could have those letters for your last three in your call sign (if no one else had them with the rest of the letters and number) under the Vanity Call system. When applying for vacant Vanity call signs that may be available to you, you have to be aware that it depends on your license class. Extra class licensees can pretty much choose any vacant US call sign. Advanced class licensees cannot seek the 1×2, 2×1 or 2×2 starting with letter “A” as they are Extra class type call signs. What that means is that you cannot seek a call sign that is above your current license authority, but can take a call sign that is equal to or below the authority that you currently have!  As of April 2000, there was no longer a morse code requirement for any of the Amateur Radio Operators tests, and there is only three levels (Technician, General, and Extra Class) of licensing.
Examinations after that date will only be given for Technician, General and Extra Class. Hams licensed under the categories that are no longer will be “grandfathered” so that they may operate as long as the old license remains in effect. This could be somewhere around 10 years as that is the length of a license So during that time or maybe never at all can you ever tell anything about the Ham operator that you or another Ham is talking to other than what country they are from! Guess the best thing is to ask them where they are located!