How to Use Amateur Radio As an Emergency Preparedness Tool 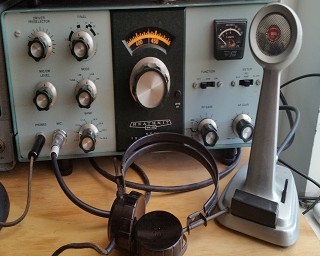 Amateur Radio as an Emergency Preparedness Tool (1 of 3)

Amateur radio is a very flexible and powerful communication option, especially in an emergency. And there’s more good news: it’s probably easier to learn about and get involved with than you think. In this and subsequent articles, I’ll walk you through the basics, and show you the simple steps you can take to add a very useful tool to your preparedness toolkit. It’s easy, interesting, and if you want to be realistically prepared to take care of yourself and your family, you absolutely need this information!

I have been involved with amateur radio (aka ham radio) for a few years now, and I’ve learned a lot. From the start, I took my Novice and General exams, and then about a year after that, I took and passed my Extra exam. (For me, Novice & General weren’t difficult, but Extra definitely was.) I’ve been actively involved in my local ARES (  Amateur  Radio Emergency Services) team, talking to friends on the radio, experimenting with digital modes, NVIS (more on that in article #3),  satellite  communications, and more. It’s been enjoyable and educational. And there’s one very interesting thing I’ve learned during this process, which will also benefit you. Most of the options available don’t make it very easy to ramp up. But not this time. My goal is to make some of these concepts much easier for you to understand. I’m going to explain things not in the manner of an electrical engineer, but like a regular guy would. Let’s get started.

In this article, we’ll start with the basics, and give you some ideas for getting more information. In subsequent articles, we’ll talk about specific equipment, technologies, frequencies, some interesting information on what’s really allowed during an emergency, and more.

Let’s start with “What is ham radio?” It’s the term used to refer to amateur radio, a fun hobby for many. But why “ham”? Some people speculate that it’s because certain people involved in amateur radio back in the old days really loved to talk, and would “ham it up”, telling long stories to their buddies when they’d get together on the airwaves to chat.

How does ham radio work? The Federal Communications Commission (FCC) has set aside certain frequencies for people to use for non-business-related communication. To use a radio that works on amateur radio frequencies, you need to take a simple test and get a license. The first license, called “Technician”, is not difficult to get, and there are a many books, CDs, and websites (with free sample tests) available to walk you through the questions and answers. Once you’ve reviewed the material and feel comfortable, you can take a test and get your own license. (Subliminal suggestion: Do it. It’s easy.) Many ham radio clubs administer the tests, and will be happy to help you with the simple paperwork at the same time. Soon after, you’ll get your call sign from the FCC, and you can get on the air!

This link will provide some additional, general information about ham radio: http://www.arrl.org/what-is-ham-radio-1.

Why does ham radio matter? It doesn’t take a lot of imagination to come up with a scenario where cell phones don’t work. You’ve probably been out of range of a cell tower at some point, and wanted to make a call. But imagine if there was no coverage, no matter where you went…And a phone call could mean life or death.

Aside from being fun to play with just talking with friends, amateur radio is a very effective way to communicate during an emergency. With something as simple as a small, handheld radio, an operator can do these things in addition to voice communication:

Transmit GPS coordinates
Send simple text messages
Send email (with the help of your computer)
Sent small or large amounts of data directly (without email software needed, but using a computer)
Transmit any of the above directly (line of sight) for several dozen miles or more (depending on antenna type and height, amplifier use, etc.)
Transmit using existing, publicly available repeaters to achieve long-range communications with a small, low-power radio
By using a mobile radio (in a vehicle) or base station radio (usually on a desk), along with an appropriate antenna, a ham radio operator can communicate across great distances, even across continents and oceans. Here’s an interesting example: I listened to a ham radio operator as he transmitted and then moments later received his own transmission after it bounced its way through the atmosphere, all the way around the earth!

What can you do right now to get started? Go get your FCC Technician license. It’s easy, really. The FCC publishes all of the possible questions and answers, and you can find good resources for practice tests here: http://www.arrl.org/exam-practice. It’s a simple, 35-question test and if you pass, your license is free and is good for 10 years! (Note: License exams hosted by volunteers usually charge a small fee, around $15, in the U.S.)

In upcoming articles, I’ll discuss UHF & VHF radio (often used for local communications), HF radio (which can be used for local/regional as well as long-distance communications), different things you can do with your radio, antennas, and more. In the meantime, if you’re interested in learning more, do an Internet search for local ham clubs and ARES/RACES groups in your area, and contact them. You can probably find people in your area who would love to talk about what they do. All you have to do is ask!