Meteorite smashes into moon in largest lunar impact ever recorded

Rock travelling at 61,000 km/h punched a crater 40 metres wide and produced a flash that could be seen from Earth 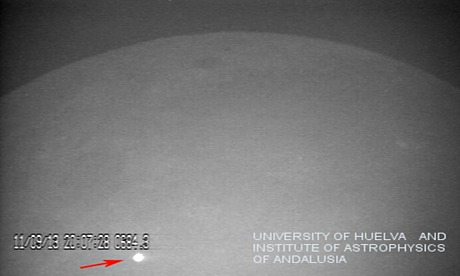 The flash was picked up by two telescopes in Spain’s Midas observatory. Photograph: J Madiedo/Midas

Astronomers have captured the moment a lump of rock slammed into the moon with so much force that the bright flash could be seen from Earth with the naked eye. The 400kg meteorite, travelling at 61,000 kph (40,000 mph), punched a fresh crater into the moon’s surface some 40 metres wide in what is thought to be the largest lunar impact ever recorded.

The rock, which was around a metre in diameter, ploughed into an ancient lava-filled basin called the Mare Nubium, producing a flash almost as intense as the Pole Star that took more than eight seconds to fade.

The impact energy was equivalent to 15 tonnes of TNT – at least three times as great as that from the previous record-holding lunar impact, observed by NASA in March last year.

The event was recorded by Spanish telescopes that monitor the moon under a project called Midas (Moon Impacts Detection and Analysis System). The flash was picked up at 8.07pm GMT by two telescopes in Seville, southern Spain. Both were peering at the unlit side of the moon where the bright flickers from impacts are easier to spot.

Unlike Earth, the moon has no atmosphere to protect it from incoming meteorites, so the surface is pocked with craters. The rock would have swiftly burned up in the Earth’s atmosphere long before it reached the ground.

Details are published in the latest Monthly Notices of the Royal Astronomical Society.

Astronomer Jose Madiedo, who leads the Midas project at the University of Huelva, saw footage of the strike soon after the telescopes’ software had processed the impact on 11 September 2013. “When I saw it on the screen I realised I had witnessed a rare and unusual event. It was really huge. I couldn’t imagine such a bright event,” he said. “We image a lot of impacts on the moon, but they’re caused by very small rocks. They can be the size of a nut, and just a few grammes, and go up to 1kg. But this event was really impressive and very rare,” he said.

The telescopes capture scores of much smaller lunar impacts every day. The smallest rocks the telescopes can see weigh only a few grammes and hit the lunar surface every three hours or so.

The telescopes spot impacts from the tiny flashes of light produced as the rocks are vaporised in the intense temperature of the collision. The flashes usually last just a fraction of a second, but the flash from the 11 September impact lasted longer than any seen before.

By observing the moon, Madiedo hopes to learn more about threats to Earth. “We are very close neighbours.

What happens on the moon can also happen on the Earth,” he said. “This impact … shows that the rate of impacts on our planet for rocks of this size, around one metre in diameter, is about 10 times greater than we thought.”

Few rocks this size would be a danger to people on Earth, because most would be completely destroyed as they burned up in the atmosphere. Though parts of very resistant rock might survive the intense heat of entry and reach the ground as small meteorites, they would not pose a serious threat, Madiedo said.

• This article was amended on Monday 24 February 2014 to correct the SI unit of the speed at which the meteorite was travelling.