Amateur Radio – The Story of the American Radio Relay League 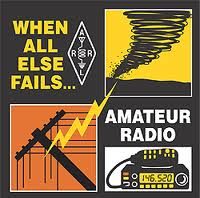 The American Radio Relay League was founded in 1914 and is the USA’s largest membership organization for radio amateurs, with over  154,000.  It is a non profit making organisation that provides both technical advice and assistance to amateur enthusiasts as well as supporting a number of educational programs throughout the US. It is also the primary representative organization of amateur radio operators. The ARRL represents its members by lobbying Congress and the FCC and performs a similar role internationally.

Local and regional activities of ARRL are carried out through its Field Organization which divides its 15 divisions into 71 separate regions called Sections. One of its most important functions is organizing emergency communications in the event of natural or civil disasters. Each section of ARES, (American Radio Emergency Services) has an appointed Section Emergency Coordinator. ARES also supports training and organizes regular practise exercises and establishes Memorandums of Understanding with relief agencies and government and has provided essential emergency communications a great many times throughout the leagues history.

Hiram Percy Maxim of Hartford, Connecticut was a well known business man, inventor and engineer and was an active member of the Radio Club of Hartford, he also had one of the best equipped stations in his area.

One night in April 1914 he tried in vain to send a message to another ‘ham’ 30 miles away in Springfield, Massachusetts which was well within his normal range. He then remembered that he had another contact in Windsor Locks which was about half the distance away, he contacted him and asked him to relay the message to Springfield which was done successfully.

This set Hiram thinking, most of amateur radio activity in those days consisted of sending and receiving messages but the maximum range of a station was a few hundred miles at most which made Hiram realise that a formally organized relay system could be of tremendous use to the radio ham and the public alike. At the next club meeting he put forward a plan for the organization of an American Radio Relay League, the club agreed to sponsor the development of the organization and ARRL was born. Membership was limited to highly qualified amateurs only and to their surprise by September there were 230 stations on their books.

In early 1915 ARRL split from the club and became incorporated under Connecticut law. However finances were very poor, the only income came from message blanks, maps and booklets. But ARRL kept growing and by March they had 600 stations on the roster, and some stations claimed communications of over 1000 miles. It was clear that something was needed to keep in touch with the members and Hiram and Clarence financed the first issue of QST but later issues had to be paid for through subscriptions of $1.00 per year.

In 1916 membership was almost 1000 and in February 1917 there came a breakthrough, a message was sent from New York to Los Angeles and an answer received within one hour twenty minutes.

Up to this time the ARRL had been run entirely by the two friends but owing to it’s huge success something more formal was called for. A constitution was adopted and directors and officers elected. The President was Hiram Maxim and the Secretary Clarence Taska and membership was opened to anyone interested in radio. No sooner was this done than all amateurs received a letter from the Dept. of Commerce ordering them all off the air and all antenna had to be taken down. The USA had entered WW1.

After the armistice in 1919 the amateurs were allowed to put up their antennas again but only for receiving. With the long lapse in activity the ARRL had exactly $33 in the kitty. They implemented a financial plan where they sold bonds to members and managed to raise $7500, bought QST from its owner, Clarence Taska, and in November amateur radio was fully restored.

In 1923 a two way contact between Connecticut and France bridged the Atlantic for the first time.

In 1925 the International Amateur Radio Union was formed.  It’s headquarters are still in Newington.

The 1930s were a difficult period as the Great Depression took it’s toll. Hiram Percy Maxim died in 1936.

History repeated itself during WWII with amateurs being told once again to leave the air and take down their antennas. Thousands of amateurs served in the conflict and as soon as the war was over the bands began to open again.

It has not all been plain sailing since that time but through it all amateur radio has gone from strength to strength. More and more ‘hams’ have joined the ranks and continue to, not only enjoy their hobby but have fun doing it. At times of emergency and disaster there are many unsung heroes among the ARRL’s amateur enthusiasts.